Ynys Môn is heaped in history and tradition, or so we are told, but not everything is a straight forward as you think.

Ynys Môn like many other parts of Wales it seems has many Celtic Saints; one meaning of Llan is a parish that surrounds the Church of a Saint. However, when you look closer at the dates, when many of the islands Saints where canonized, you will see they where around the 7th Century, which coincides with the Catholic revival of the period.

It reminds me of a time, after visiting Lourdes in France, we stumbled across a quiet and rather non descript French village and the start of a running joke - “What this place needs is a miracle!”. 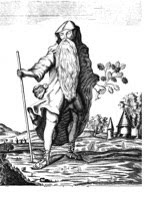 We all know of a modern age Druid, that is fighting for the island, however the Druids may have not been here in the first place, even if one has returned, it was sadly the mistaken invention of Henry Rowlands.

Henry Rowlands (1655-1723) was born on Anglesey at Llanedwen and became rector of Llanidan Old Church. He wrote about farming practice in Idea Agriculturæ and in 1710 produced, in Latin, Antiquitates Parochiales about the ancient monuments of the locality. His best known w 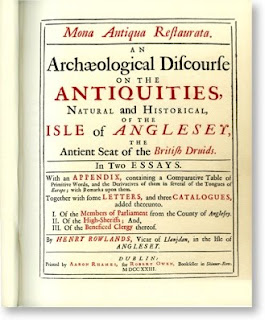 ork was Mona Antiqua Restaurata (1723)—literally ‘Ancient
Anglesey restored’—in which he mistakenly linked the island’s Bronze Age sites with the Druids, the priests and lawgivers of the ancient Celts. This fanciful anachronism, compounded by the English antiquarian William Stukeley, was seized upon in Victorian times and still persists today. However Rowlands does deserve credit for focussing attention on the island’s ancient sites.
Posted by Rhys Williams at 11:41

The first edition of ‘Mona Antiqua Restaurata’ is available in a new facsimile edition from www.lllyfrau-magma.co.uk