Anglesey and GVA – Part I.

Albert Owen MP caused a bit of a stir when he wrote a recent letter to the Daily Post making some claims about Ynys Môn and the GVA (Gross Value Added) statistics.

Now, we are not about to defend what he said, that’s a matter for him, instead we thought we would consider some of issues that contribute to why the GVA of Ynys Môn is low in comparison to the national average.

First, we can look at the population as recorded by the census of 2001.

Things of note are the islands ageing populations in comparison to the national average, and the disappearing youth from age 19 upwards. We think they went to college or found permanent jobs across the bridge.

Then we can look at the economic inactive. According to a report by Ynys Mon County Council (see full report here) one of the main concerns is the high level of long term unemployed (more than 12 months), in comparison with national average. In March 2007 it was 28% of those claiming job seekers allowance in comparison to the national average of 13%.

To finish on the GVA statistics themselves, and we have no reason to doubt them, we only mention that they where adjusted for Ynys Môn for the pre 2001 data, and are as shown below: 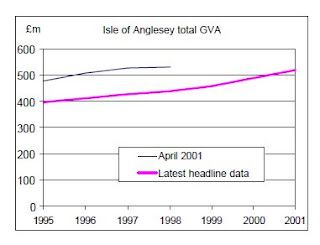 For full report see here
Posted by Rhys Williams at 17:02

Good to see you are living up to your original monicker of Stats Man!

A very interesting bit of research. Although its interesting to compare Anglesey's demographics with that of the UK as a whole, I think comparing it with other equivalent rural areas would me more informative in determining the scale of the out-migration of young people and in-migration of the elderly. The issue as I see it is twofold:

1. Although I would want all able people to have the opportunity of going to University, I wonder whether the 50% target arbitrarily set by the previous government is too high. I'm certain it has had a very large effect on drawing the young out of rural areas and more of them leave than ever return again.

2. Lack of jobs for the young on the island. However this is partically linked to point (1) as in the past those who didn't go to University would have been the people who set up their own businesses or shops thus creating more work and prosperity. When we lose those people, the overall island economy suffers.

I wonder what you think?

A post on inward migration to and from Anglesey is coming soon. You are quite right in identifying lack of jobs for young people as one of the problem, this island has, and whether the university entrant target set by the Labour Government was realistic, maybe we should make it easier for companies to take on apprentices.

Apprentice schemes are the key. I've been meaning to blog on it for some time now but never seem to have time, but I would like to see Wales being far more radical about education. The current system is designed just for those who are academically gifted, there needs to be another stream for more vocational qualifications -- something similar to what they have in Germany.

I'll be looking forward to your post on inward migration.