Ynys Môn was once known as 'Môn Mam Cymru', and was named as such during the middle ages, as its fertile fields were the breadbasket of North Wales.

We know that premium foods are good for remote regions, (i.e. shellfish from the Outer Hebrides) because they can attract premium prices, making the product viable. Also some regions over the years, have built reputations for excellent food, the Ludlow food festival is a good example, or Trinity College of Ireland.

Countries have also shown us the way forward. Bacon and you think ‘Danish’, lamb that be New Zealand, a decent wine irrespective of year, Australia. 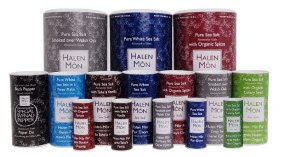 Now we know this formula can be successful on the island, Anglesey Sea Salt being one, or Derimôn another. So why cant we build on these success stories and establish an image of Anglesey as a producer of ‘Organic’ and ‘Green’ wholesome food. Why don’t we invest in premium foods, in research to find key markets for the island, and in development and marketing. Associated with this we should encourage award winning restaurants and hotels to open and attract tourist and punters to stay and enjoy. We should aim to be the destination for all aspiring chefs, a place to learn and make a name for themselves.

Tourism makes money, think of nations that consume and spend the most and really dig history, especially if it involves folklore, and the next logical steps are not that difficult are they?

Forget building prisons, or attracting a large manufacturer or some vague concept of an energy island – “yeah dad lets visit that place that produces electricity”, rather lets think within the kitchen and make the island once again the breadbasket of Wales.
Posted by Rhys Williams at 19:03

I have often lamented the fact that despite some incredible views, Anglesey does not have even one good restaurant on the straits or the coast where tourists can eat well and enjoy the scenery.

I agree entirely. (with you and Druid both).

The main problem I have is the lack of an economic development plan for the island. (The Local Development Plan)

I've thought of three or four SME scale businesses in this general area, (speciality foods and horticulture), however I'd be very wary about trying to start up a business in this current climate of mid-term economic uncertainty and the high bank charges for setting up start-up loans. (They want your home for collateral!)

Another area where I've thought of business start-ups is in 'the creative industries' including educating our young people in IT based services and technical production using IT, (as these are not dependent in having a presence in London or other big cities) - once again long term economic planning is needed at a national strategic level, as businesses falling into this category (educational) most likely depend on an accessible steady stream of public funding to provide the 'bedrock tickover' of day to day employment.

I had brought a 'tourist based outdoor adventure facility' idea through the feasability and design stages about four years ago, but didn't take it further, due to the above mentioned factors(a wise move in retrospect given the appalling weather we've had for the last three years).