The importance of 'pawb' 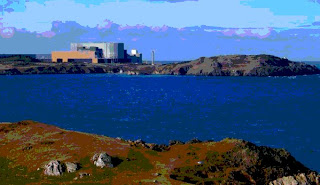 The residents of the island are not in favour of Wylfa B, is I think the message that PAWB, the anti nuclear campaign group were saying when they published the results of a survey of 500 they had commissioned. No surprise there then some would say, but I’m sure the survey carried out by Bangor University was all very scientific and correct.

We are consuming and wasting far too much, whilst rushing blindly torwards the future ignoring most warnings about the problems we are causing. Call it what you may, but lets be clear we are not talking about saving the planet; her destiny is already mapped out in the stars. What we should be talking about is saving our civilisation, whether as pointed out by some you can call it ‘civil’ is a moot point. You need only study nature to realise what happens to a species that out grows its own food supply.

And of nuclear waste and what to do with it, 'store it safe for a very long time' is maybe the only answer we have at the moment, but we are rather good at storing things safely for a long time. True there are bad examples from the early days of nuclear development of how not to store nuclear waste, some of which is still a cause of concern at Sellafield. Maybe one day we will develop a means of making the waste safe quicker, than having to wait a very long time as it degrades to a safe level.

Otherwise, we need to drastically reduce our reliance on electricity. In example, goodbye to gadgets like i-phones and i-pads, flat screen TV’s etc, not just because of the electricity they consume, but mainly due to the electricity used to produce them, to keep the networks running, and lets not forget the rare metals used in their production. We would need to embrace a mass transport system and say goodbye to individual electric cars, which are not as green as they are made out to be. But lets be honest, can you really say you could sell that message today?

Nuclear power is a proven technology, but still it’s important that the likes of PAWB keep on asking difficult questions and demand reasonable answers, for it’s an industry that needs proper scrutiny for our well being as well as those of future generations.
In welsh pawb means everyone.
Posted by Rhys Williams at 11:49

Having listened to the UK Minister for Energy issue an unreserved apology to the families of those who worked at nuclear power stations and had their organs and bones removed without permission, (for examination of the effects of strontium 90 on their bones and other types of radiation on their organs).

These practices which had been going on for 50 years were described by the Minister as 'highly unethical and totally unacceptable'.

When this sort of thing is going on there does indeed need to be a close watch kept on the Nuclear industries.

It's not as if there aren't enough fingers pointing at Big Business and Mega-Corp Inc already while crying 'moral hazard', without having to keep an eye out for Horizon/Eon using irradiated waste to back-fill Bethesda's Penrhyn quarry in order to save a few quid and make the books look good.

NB. Not that I can find anything about this scandal on the BBC main news pages - I heard it on the World Service.