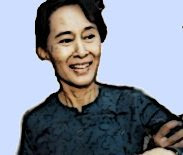 I type these words in the safe knowledge that no one is likely to break through the front door and drag me away to be detained by a regime for daring to criticise the state.

But this is the daily reality for many throughout the world, who dare speak out against an oppressive state. And now and then we see beacons for democracy, that break through the darkness of an evil regime’s propaganda, and give us hope that if we all stand together in our belief in democracy that all is not lost.

It is not only their bravery we applaud, but their dignity and humanity, which had we been faced with the same daily provocation as they, we could not match.

One true beacon can be found in the forgotten land of Burma. Aung San Suu Kyi the pro-democracy leader and Nobel Peace laureate, has come to symbolise the struggle of Burma’s people to be free. She has spent more than 15 years in detention, most of it under house arrest, and was only recently released from her third period of detention on Saturday 13 November 2010.

We should all support her and the people of Burma on their path to peace, freedom and democracy.
Posted by Rhys Williams at 13:05