"It's not your own life, it's the crew. When I thought I could do something spectacular and very risky I had to remember that I was risking other lives as well." Dick Evans

These are the words of a brave man, whom with his crew on numerous occasions, carried out daring sea rescues. As Moelfre lifeboat coxswain, he is one of the few sailors ever to have won the Royal National Lifeboat Institution Gold medal for bravery twice.
Dick Evans received his first gold medal for bravery when he helped rescue the stricken Hindlea on October 27 1959. In a hurricane, with winds gusting up to 104mph, he and his crew rescued the crew of the Hindlea as 48 foot waves pounded the lifeboat.
He won his second gold medal at the age of 61, for his efforts to help save the crew of the Greek freighter Nafsiporos, which had lost power in a cyclone and was drifting dangerously close to the notorious Skerries islands off Holyhead. With his crew of Murley Francis, Hugh Owen, Evan Owen, Huw Jones, William Maynard Davies, Capt David Jeavons and his own son, David, Dick Evans helped rescue the crew off the ship, despite sustaining great damage to the lifeboat. 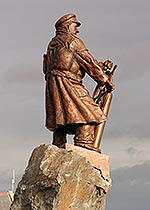 At Moelfre by the Seawatch museum, there is a bronze statute in honour of the great man. Dick Evans was born at Moelfre on 19 January 1905 and died 14 September 2001.

You can donate to the RNLI at their website