The Council of Europe 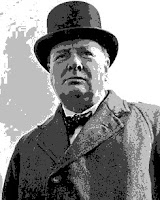 As we wait for that 'landmark speech', I think again that it's important to distinguish between the European Union (EU) and the Council of Europe. The Council of Europe was set up following the Second World War and a desire in all nations for lasting peace.

The following is an extract from the Statute of the Council of Europe:

Convinced that the pursuit of peace based upon justice and international co-operation is vital for the preservation of human society and civilisation;

Reaffirming their devotion to the spiritual and moral values which are the common heritage of their peoples and the true source of individual freedom, political liberty and the rule of law, principles which form the basis of all genuine democracy;

Believing that, for the maintenance and further realisation of these ideals and in the interests of economic and social progress, there is a need of a closer unity between all like-minded countries of Europe;

Considering that, to respond to this need and to the expressed aspirations of their peoples in this regard, it is necessary forthwith to create an organisation which will bring European States into closer association,

Have in consequence decided to set up a Council of Europe consisting of a committee of representatives of governments and of a consultative assembly, and have for this purpose adopted the following Statute.....

And as we know the European Court of Human Rights is part of the Council of Europe and not the EU. The Council of Europe was founded on 5 May 1949 by the Treaty of London, and in a speech at the University of Zurich on 19 September 1946, Sir Winston Churchill said:

I must now sum up the propositions which are before you. Our constant aim must be to build and fortify the strength of the United Nations Organization. Under and within that world concept we must re-create the European Family in a regional structure called, it may be, the United States of Europe. And the first practical step would be to form a Council of Europe. If at first all the States of Europe are not willing or able to join the Union, we must nevertheless proceed to assemble and combine those who will and those who can. The salvation of the common people of every race and of every land from war or servitude must be established on solid foundations and must be guarded by the readiness of all men and women to die rather than submit to tyranny. In all this urgent work, France and Germany must take the lead together. Great Britain, The British Commonwealth of Nations, mighty America and I trust Soviet Russia - for: then indeed all would be well - must be the friends and sponsors of the new Europe and must champion its right to live and shine.

Therefore I say to you: let Europe arise!
Posted by Rhys Williams at 01:18