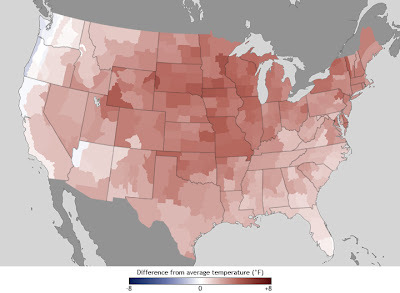 'By a wide margin, 2012 was the United States’ warmest year on record

And the New York Times in a report on Tuesday 8 January says:  It’s Official: 2012 Was Hottest Year Ever in U.S.:

'......Last year’s weather in the United States began with an unusually warm winter, with relatively little snow across much of the country, followed by a March that was so hot that trees burst into bloom and swimming pools opened early. The soil dried out in the March heat, helping to set the stage for a drought that peaked during the warmest July on record.

The drought engulfed 61 percent of the nation, killed corn and soybean crops and sent prices spiraling. It was comparable to a severe drought in the 1950s, Mr. Crouch said, but not quite as severe as the Dust Bowl drought of the 1930s, which was exacerbated by poor farming practices that allowed topsoil to blow away.

In addition to being the warmest year since extensive records for the contiguous United States became available in 1895, last year turned out to be the second worst on a measure called the Climate Extremes Index, surpassed only by 1998.

Experts are still counting, but so far 11 disasters in 2012 have exceeded a threshold of $1 billion in damages, including several tornado outbreaks; Hurricane Isaac, which hit the Gulf Coast in August; and, late in the year, Hurricane Sandy, which caused damage likely to exceed $60 billion in nearly half the states, primarily in the mid-Atlantic region......'
Posted by Rhys Williams at 19:45