Has BBC Wales forgotten what its purpose is? 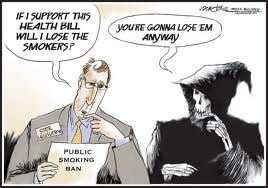 I read with the interest the call by BBC Wales for actors to be given an exemption from the smoking ban in Wales, so that they may be allowed to smoke on set in the interest of 'historical accuracy' - see Smoking ban could force dramas out of Wales, BBC warns

The question is - is 'historical accuracy' that important to such a detail?

There are a lot of things we know people did in the olden days that society in general do not tolerate these days - take language for instance, they are certain words common place in the past that we would not tolerate being used today...and it should be the same with smoking.

Smoking is bad for you, and not only to you but those around you - the link between passive smoking and cancer is beyond doubt. See Cancer Reaserch UK

Which brings me to the purpose of the BBC and it's Royal Charter which says:

3.The BBC’s public nature and its objects

(1)The BBC exists to serve the public interest.

(2)The BBC’s main object is the promotion of its Public Purposes.

And its Public Purposes are (inter alia):

(a) sustaining citizenship and civil society;

(b) promoting education and learning;

Not forgetting BBC responsibility to protect the health and safety of its employees.

Therefore the BBC purpose is to serve the public interest, and to promote and educate - in example a healthier lifestyle.

Which begs the question has BBC Wales forgotten its purpose? - Is it really necessary for 'historical accuracy' to see someone actually smoke on set? - even when the consequences of smoking are integral to the storyline....of course it isn't.

Would not seeing anyone actually smoke in a period drama make it better or worse, or would the fact that you noticed no one actually smoked mean it was a poorly written drama in the first place?

After all smoking in films and on television does have an affect...the Centres of Disease Control and Prevention in the USA says regarding movies:

If it's a choice between promoting public health and protecting employees from passive smoking and so called 'historical accuracy' then public health should trump every time.
Posted by Rhys Williams at 10:41

Out of all the smokers I know, all bar one would love to be able to stop.

If anyone ever found a way of eliminating the psycological craving that would be the end of smoking in this country.

Has anyone else noticed that most of them tend to be young women now?

Giving up smoking is rather like a lot of other things in this life .... it takes a bit of determination!

Just the same as not having babies until you can properly afford them, getting a decent education, going holding onto a job, proving a responsible neighbour and so on.

Shame most parents don't bother to teach their kids that 'determination' is often the determinator in a happy or sad life.