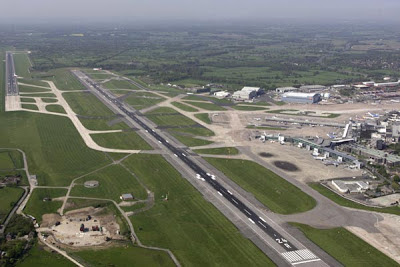 The Welsh Conservatives; at the Welsh Assembly this Wednesday, will hold a debate on the current bid by the Welsh Government to purchase Cardiff International Airport. A private company would then run the airport on behalf of the Welsh Assembly, on what I take it would be a not for profit basis.

The Conservative following their long held dogma against anything in public ownership oppose the purchase. Conservative transport spokesman Byron Davies said to BBC News "I don't believe nationalisation is the way forward," [....]

"There is no current reason to believe their ownership of Cardiff airport will be anything but another financial calamity."

Although facts really don't hold up that argument, as most of the worlds best airports are in public ownership.

And as we have discussed before the award winning Manchester International Airport is another good example of a public/private partnership see.. The Thursday Quiz - Regional Airports.

Also as argued by Neil Clark writing for the Guardian in December 2010 'Why we should nationalise our airports', 'the failure of BAA to deal with recent snowfalls has exposed the price we pay for having our infrastructure in private ownership.'

And the private ownership of Cardiff International Airport cant be said to be a success can it? - surely if we are to encourage international business to invest in Wales we need an international airport to be proud of, something we don't have currently, and as we know public/private run airports can be successful as proved throughout the world.

Finally some airport trivia - did you know that a major shareholder in Bristol Airport with approximately 49% is Ontario Teachers’ Pension Plan.
Posted by Rhys Williams at 11:01

As I said in a recent post,as long as Bristol Airport is as accessible to South Wales as it is then unless Bristol shuts up shop Cardiff Airport has a snowball's chance in hell of being a success. Carwyn and his inept mates would do better in concentrating on improving our schools and health service than throwing taxpayers money down the pan trying to get a failed airport to succeed where is has failed so badly in the past.
They already throw hundreds of thousands of pounds away in subisdising Ieuan's Teeny-Weeny Airways from Valley to Cardiff so please, no more dabbling in failed projects. If this crazy scheme of Carwyn's goes forward then how much in subsidies will we be forking out to dig them out of an even bigger hole?

Gruntfuttocks - Likewise the Ynys Mon/Cardiff Airlink. The overwhelming bulk of the population of North Wales lives near to the English border.

RF - Which is why the link is known as Ieuan Air to we cynics. Ieuan Wyn Jones was very much the driving force behind this madness when he was leader of Plaid in coalition with Carwyn Jones' bunch of numpties and most of the passengers are public officials who can't be arsed to take the train. Did you by any chnace see that dopey bird Ediwna Hart in the Senedd yesterday backing up the Caridff Airport scheme? She burbled on about us as a country needing our own airport. Why? Easy Jet and Ryan Air have deserted Cardiff as a lost cause as has a Swiss airline which recently decided not to continue using Cardiff. At this rate Ieuan Air wiil be the only 'airline' using the airport. As you say, with Manchester and Liverpool Airports so accessible to us in the north it would be sheer folly to try to develop an airport here, same applies to the south. I have many friends and family down there who would rather go the extra few miles to Bristol than use Cardiff.