Our colder summers and Greenland

Last year we had a cold and wet summer, relatively speaking, in fact for the months May to July total max temperatures have been falling year on year as shown in the chart below:

Now as we have discussed before one reason for last years colder weather was the jet stream that stalled see:  Is this the summer of our futures?

And a possible reason for the jest stream stalling was a high pressure that parked itself over Greenland. 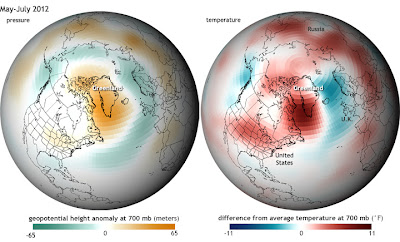 The above maps are from ClimateWatch Magazine's article - Summer weighing heavily on Greenland Ice Sheet, which explains:

'The map on the left shows the difference from average pressure at the 700 millibar pressure level from May-July 2012 compared to the 1981-2010 average. Gold colors indicate higher-than-average pressure. A large dome of high pressure camped over Greenland and the Northwest Atlantic this summer. The influence on temperatures (map on right) was dramatic. Temperature anomalies at the same altitude were as much as 11 degrees Fahrenheit warmer than average over Greenland....

[And]...Research published earlier this year found that since the late 1950s, the 6 warmest summers and 5 of the 6 largest melt years in Greenland have occurred since 2000. A similar “dome” of persistent high pressure was common to each of the episodes, but it is probably not the sole cause of the unusual warmth and melting.'
Posted by Rhys Williams at 00:49