The politicians answer - hold a review and make it comprehensive. 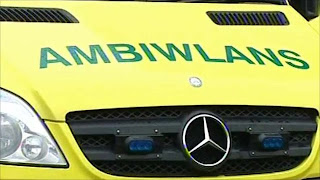 As we know the Welsh Ambulance service has failed to meet it target of reaching 65% of emergency calls within 8 minutes. As I said yesterday, as a measure of the quality of the service, this arbitrary target is rather pointless, as it easier to meet in large cities and towns than in rural areas. Then there are the factors outside the control of the Ambulance Service that affect these times.......poor weather or busy A&E meaning Ambulances having longer waits, to name but two.

Ideally what you should to do is combine the fire service and the ambulance service into an all Wales Emergency Response Service, and separating the transfer of patients back in to the local heath boards responsibility. Well that what happens in most other countries.

But that not going to happen is it, and if you want to increase response times, which after all is really just an exercise in logistics, making sure you have enough ambulances in the right place at the right time, I suspect what you need is more ambulances, more staff and more money. Especially in the future, with fewer hospitals and greater travel distances,  tying Ambulances and Paramedics up longer.

But of course we ain't got the money, they struggled to agree the Ambulance budget this year, no doubt the health boards wanted to pay less, but demanded a better service.

As reported by  BBC Wales - Lesley Griffiths [the Health Minister] has announced plans to improve response times as well as holding a "comprehensive review" into the service......

It failed to meet the target of responding to 65% of the most urgent calls within eight minutes for the fourth successive month.

But the minister announced she wants to increase the Category A target to 70% of calls whereas in England it stands at 75%.

A final decision will be made after the review is completed, the Welsh government said.

Ah the politicians default position, when they cant make a decision ...which in this case should either be give  more monies to the Ambulance Service to improve their response times, or be honest and say in these days of austerity this is the best we can hope to achieve as things stand.

But no kick it into the long grass by announcing a comprehensive review. Although to be fair to Lesley Griffiths I suspect that in her in tray, there are far more important and controversial issues she needs to deal with...one being the proposed closure of many community hospitals.
Posted by Rhys Williams at 11:39