Flooding and lessons from USA 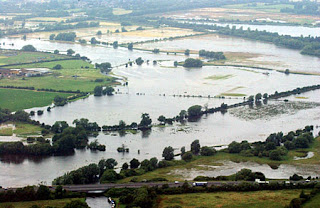 I know it's sad for those whom recently have lost possessions in the floods, but then again it's a simple fact - if you own a property near to a river or on a flood plain, even an old flood plain, then you have to expect that sometime in your lifetime your property may be flooded.

Not unsurprisingly every time a flooding incident occurs the politicians are out in force, talking of "shocking scenes of flooding"(copyright David Cameron). And demanding that more defenses be built to protect properties.

But is building more flood defenses the long term answer?

In the USA they have long realised that this is not the answer.

"Flooding remains the most common and one of the most costly categories of natural hazards in the United States. Historically, the United States has relied on structural mitigation, insurance, and disaster relief to mitigate the harm done by floods. However, experience has shown that structural mitigation and related policies can fail to protect lives and property while also contributing to the degradation of the riverine environment."

The above from River Ecology and Flood Hazard Mitigation.

As it seems likely due to 'global warming' we will see extreme weather more often, we need to get a grip of development within flood plains. First of all because of the environmental damage that is does, and secondly because of the high cost in the long term of doing so.

What we really need is a Environment Agency with real teeth, that can have the powers to stop damaging development in flood plains, or developments that would be likely to contribute to damage in flood plains.

But realistically that's not going to happen is it? - can you see any of the main stream parties with enough backbone to legislate for that?

As for existing properties, the answer is seems is to work with nature, and i.e. allow for controlled flooding, which is after all a natural occurrence, and allow low lying farm land to be flooded, with compensation to the farmer, in order to reduce the flow of the river. As the above paper says:

Given these features of flooding and the policy responses to floods, we recommend that federal agencies address flood hazards by using one or a combination of the following techniques, listed in descending order of desirability:

Risk avoidance is at the heart of Executive Order 11988’s mandate; if this executive order were more effectively implemented, our recommendation would be implicitly adopted, with risk avoidance becoming the preferred tool. Currently, however, federal agencies seek primarily to mitigate and indemnify, not to avoid risks whenever possible.

Which is more or less the situation also in the UK.
Posted by Rhys Williams at 10:28