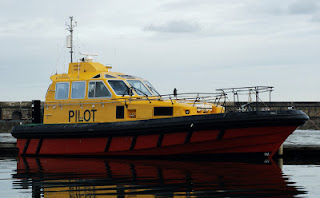 Here's a good quiz question - what is the connection between Holyhead and Sydney?

The answer, hat tip to the blog Vessels at Holyhead, is pilot boats as explained in the Sydney Ports Newsletter April 2012:

New Pilot Boat on Track for September
It has yet to be launched and is yet to be named but, if all goes to plan, Sydney Ports will have its first new pilot boat in 23 years in September this year.

The first of two new boats on order, construction of the 16 metre vessel is well underway and is expected to begin sea trials in late June. [2012]

It is being built by North Wales based Holyhead Marine which has more than 40 years experience designing and building work boats, tugs and pilot boats for clients around the world.

Our second boat is also being built there and will be ready for trials towards the end of the year.

Harbour Master Philip Holliday says our old boats have earned their pending retirement having served us well for up to 31 years.

“Our crews have developed strong bonds with our old boats and it won’t be easy for them to say goodbye but our new vessels have a proven track record in numerous ports around the world and I’m confident they’ll become respected work horses on the Sydney Ports fleet.

“They have double chine hulls that handle big seas very well and each will have two 600-horsepower Scania engines capable of driving these 24-tonne boats at better than 25 knots.

Philip said the first boat is expected to be shipped to Australia in September and ready for use later that month.

It's good to see that not only do we import ships from down under, we also export some there too, and is further confirmation of the growing success story that is Holyhead Marine

For more pictures of  'Sharp' the second pilot boat see the blog Vessels at Holyhead.
Posted by Rhys Williams at 17:07