The 'Teetotal Society' and Llanfechell, Anglesey 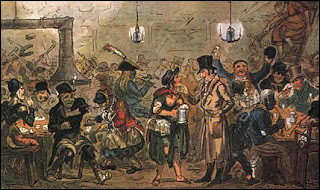 During this years general election there were objections to the hotel 'The Holland Arms', Llanfachraeth from being used as a polling station. This was lead by the Christian Party candidate David Owen.

The reason given for the objections, the islands long history of temperance. It was in Llanfechell in 1835, that the first teetotal society in Wales was founded, the society advocates the virtues of total abstinence.

The temperance societies started in the USA in the early 1820, and Welsh migrants in 1832 established the first welsh temperance society in Manchester, UK. The early societies emphasised drinking in moderation, the Ebbw Vale Temperance Society allowed two pints of beer per day.

There was a growing concern about the level of drinking in Wales following the passing of the Beerhouse Act 1830, which allowed for a huge increase in the number of drinking establishments.

The Beerhouse Act 1830 liberalised regulations on the brewing and sale of beer by individuals in the UK. The Act enabled anyone to brew and sell beer, ale or cider, whether from a public house or their own homes, upon obtaining a moderately priced license of just under ₤2 for beer and ale and ₤1 for cider, without recourse to obtaining them from justices of the peace, as was previously required. The result was the opening of hundreds of new pubs throughout the UK, and the reduction of the influence of the large breweries. It was only repealed in 1993

It was believed that the passage of the Act during the reign of William IV led to many taverns and pubs being named in his honour. Backed by the Duke of Wellington's ministry, allegedly to wean the public from gin consumption, the Act proved controversial, having both removed the lucratively monopoly of local justices and by failing to apply to publicans running existing public houses. It was denounced as promoting drunkenness.

Source: 'A history of Wales' by John Davies and Wikipedia.
Posted by Rhys Williams at 21:38