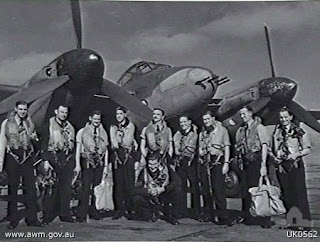 "No. 456 squadron was formed on 30 June 1941 with Defiant aircraft, as a night fighter unit. This was at RAF Valley with only a few RAAF personnel to begin with.
Operations began on 5 September 1941 with the squadron already converting to Beaufighters. The Defiants left in December. On January 1942 the squadron’s first success took place with the shooting down of a Do 217. Until March 1943 the squadron flew defensive night patrols over the Irish Sea but during 1942 the Beaufighters also supplemented day fighters on convoy patrols. 1942 was also spent developing techniques of co-operation with searchlights.
The first few months of 1943 saw the squadron converting from Beaufighters to Mosquito II aircraft. With the new aircraft, the squadron began intruder patrols over France and undertook daylight sweeps over the Biscay coast with the objective of catching enemy fighters trying to engage Coastal Command’s anti-submarine aircraft. In March 1943 the squadron moved to RAF Middle Wallop and in October it was concentrated at RAF Colerne.
In February 1944 the squadron moved from Wales to RAF Ford and flew night defensive patrols over southern England using Mosquito VI and XVII aircraft. The squadron was also involved in countering the flying bomb attacks.In December 1944, the squadron was moved to RAF Church Fenton and converted to Mosquito 30 aircraft. It worked to protect Bomber Command bases against fighter attack.
In March 1945 it transferred to RAF Bradwell Bay in East Anglia to fly bomber support missions over Germany. These operations lasted until the end of the war.
The squadron was disbanded on 15 June 1945."