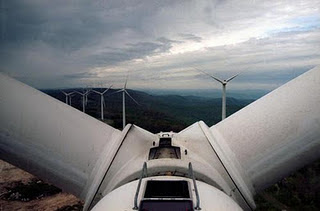 In a recent flyer from the protest group Anglesey against wind turbines they claim:

"Similar developments in Scotland and Ireland have permanently damaged their tourist industry."

I have posted before about the impact of wind farms on tourism in Scotland, see Wind farms and tourism 'compatible'.

But what about Ireland?

Research in 2008 undertaken by Lansdowne Market Research which involved face-to face interviews with 1,300 tourists, both domestic (25%) and overseas (75%) (1,000 in the Republic; 300 in Northern Ireland, for Fáilte Ireland’s Environment Unit says in summary:

Almost three quarters of respondents claim that potentially greater numbers of wind farms would either have no impact on their likelihood to visit or have a strong or fairly strong positive impact on future visits to the island of Ireland.

Of those who feel that a potentially greater number of wind farms would positively impact on their likelihood to visit, the key driver is their support for renewable energy and potential decreased carbon emissions. Those who are negatively disposed are more likely to cite that wind farms look ugly, are noisy and can frighten or damage wildlife. A small number also claim they have preference for other forms of renewable energy.

You can download the leaflet from Fáilte Ireland’s Environment Unit.
Posted by Rhys Williams at 13:00