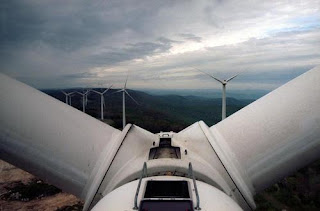 A report in the Daily Post today speaks of 'High Stakes' as Ynys Môn Council considers a number of applications for new wind farms. The most controversial perhaps is an application for three 100 metre high wind turbines at Penymynydd. This application was the reason that the protest group Anglesey Against Wind Turbines was set up.

Despite my overall support for renewables, I have to say I was glad that a protest group has sprung up to protest at the several wind turbine applications now in the pipeline, some being decided upon this week. Different views are a healthy thing, and are especially welcome on an island that, traditionally, is reluctant to protest or speak up against anything at all.

I too am a supporter of renewables, we have wind farms already on the island, albeit not as tall as some of those proposed at Penymynydd. To the north of the island there are many existing wind farms, which from certain viewpoints can be seen as a continuous strip across the landscape. Maybe because I have got used to them, but for me they blend in, they do not stand out, they have become part of the landscape.

A spokesman for Anglesey Against Wind Turbines said to the Daily post "After a bumper year for tourism, what a pity to ruin it by spoiling our island. A decrease in tourism would have a widespread effect, not only on those directly involved in providing accommodation, attractions, shops, cafes and restaurants, but also a knock-on effect on all the other places where those business owners then spend that money."

Yes, this year Anglesey, as result of a number of factors; including the royal wedding, cost of the pound, and staycations  - had a bumper year for tourism. Or to put it another way, the existing windfarms that can be seen quite predominately from the A5025 coast road doesn't seem to have deterred the tourists.

If anything is likely to deter the tourist from returning it's the delays on the A55.

But what written evidence is there about the effect of wind farms on tourist?

The title of this post Wind farms and tourism 'compatiable' is from the Scottish Government press realise on their website.

And Three quarters of tourists surveyed for the study into the Economic Impacts of Wind Farms on Scottish Tourism felt wind farms had a positive or neutral effect on the landscape. 97 per cent of tourists in the sample said wind farms would have no impact on their decision to visit Scotland again.

The full study into the 'Economic Impacts of Wind Farms on Scottish Tourism' can be downloaded from the Scottish Government website.
Posted by Rhys Williams at 13:58