This year as the 'The Royal British Legion' website says at 11am on the 11th day of the 11th month of 2011, the nation will pause.

We will fall silent and take two minutes to reflect on the sacrifice of our brave Service men and women from conflicts past and present.

And what 'sacrifice' are we remembering? - for me this was brought to sharp focus today by a report on Excavating tunnels from World War One by Robert Hall for the BBC.

You see sometime back me and my mate did a tour of France, and one place neither wanted to miss was the 'Thiepval Memorial to the Missing', Somme Battlefields, France. (Somme Memorials)

Now pardon my french, but with all honesty that day, when I was standing reading all them names and how young the majority were when they died, silently with tears in my eyes, I went fuckty fuck fuck as I realised the madness of mankind.

Which brings us to another memorial we visited - Lochnagar Crater,"The largest crater ever made by man in anger" (see above BBC report) 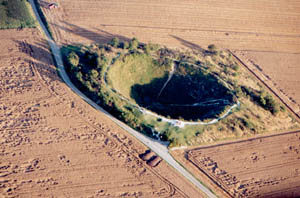 As said in Wilkipedia - "The Lochnagar mine was an explosive-packed mine created by the Royal Engineer tunnelling companies, located south of the village of La Boisselle in the Somme département of France, which was detonated at 7:28 am on 1 July 1916, the first day of the Battle of the Somme. The Lochnagar mine, along with a neighbouring mine north of the village known as the Y Sap mine, contained 24 tons of ammonal. At the time these mines were the largest ever detonated.

The explosion was witnessed from the air by 2nd Lieutenant C.A. Lewis of No. 3 Squadron RFC:

The whole earth heaved and flashed, a tremendous and magnificent column rose up in the sky. There was an ear-splitting roar drowning all the guns, flinging the machine sideways in the repercussing air. The earth column rose higher and higher to almost 4,000 feet. There it hung, or seemed to hang, for a moment in the air, like the silhouette of some great cypress tree, then fell away in a widening cone of dust and debris.

Some of the British infantry waiting in no man's land were struck by falling debris and one man, having braced himself in a trench, had his leg broken and later required amputation.

The Lochnagar mine lay on the sector assaulted by the Grimsby Chums Pals battalion (10th Battalion, The Lincolnshire Regiment). When the main attack began at 7:30 am, the Grimsby Chums successfully occupied the crater and began to fortify the eastern lip which now dominated the surrounding ground. However elsewhere the attack at La Boisselle went badly and infantry sought shelter in the crater, particular those who had been attacking up Sausage Valley to the south of the village. The prominent crater drew fire, including from British artillery although eventually it was learnt it contained sheltering infantry and the British shell fire ceased." 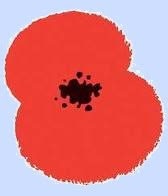 And that is just one reason I'm wearing my poppy with pride this year.