Travellers have basic human rights too.

It may seem a long time ago, but I still think that the way the travellers at Dale Farm were treated was wrong.

Recently Dale Farm has been back in the headlines with some of the families moving back onto the access roads. See BBC News Jail threat over travellers' return to Dale Farm

One of the arguments against the extension to the existing lawful travellers site was that it was development in open countryside, although how a former industrial site at the location it is, with it seems much industrial units and housing in the vicinity, can be described as open countryside is beyond me. Have a look yourself on Google Maps.

And this is how Basildon Council saw fit to leave the a site in "open countryside" after the evicitions: 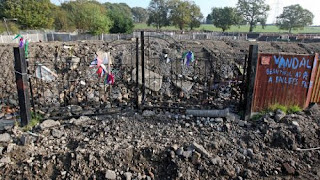 Now isn't that a nice view for the existing travellers living in the lawful site to wake up to every morning.