Growth returns to UK, albeit slowly

The preliminary figures released today by the Office for National Statistics shows that in the first quarter of this year the economy; as measured by GDP, grew by 0.5%. This is good news as hopefully the country has avoided a double dip recession. 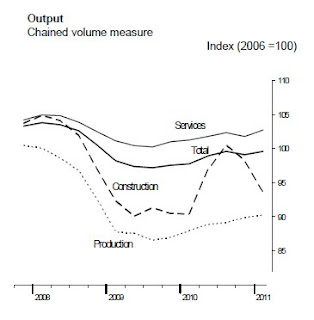 However, and as I have posted before (What now for Anglesey and the economy) the above chart shows the economy has an over reliance on 'Business Services and Finance', especially in England and Scotland. 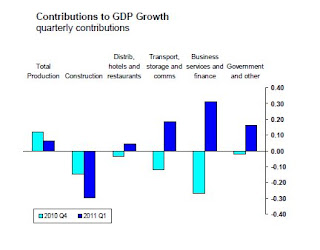 The first quarter of 2011 has seen modest growth in most sectors, other than for construction which again has seen a decline, and 'Total Production' which although has a growth of 0.4%, was less than the 0.8% growth, achieved in the last quarter of 2010.

Of interest is the growth in the 'Distribution, Hotels and Restaurant' sector, which although small, may indicate many of us are having a staycation this year. It may also show the start of the Royal Wedding affect on our economy.

However whilst we should be somewhat optimistic about these figures, we should be cautious as the economy is still flat, the effects of the main public spending cuts are still to be felt, and then there is the slow down in the production of motor vehicles and consequences thereof, due to the natural disaster in Japan.
Posted by Rhys Williams at 14:32