How stupid are they? 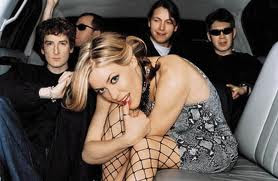 I was listening this morning to Radio Cymru and Dafydd Roberts, spokesperson for EOS and of the established welsh music scene, saying that whilst negotiations are continuing they might allow their music to be played on Radio Cymru.

But sorry how stupid have they been?

They I think over estimated their self importance, that we'd miss Dafydd Iwan reminding us that he was still in that bloody valley, that some of us might actually think Radio Cymru is in fact better with less music. That for welsh music there are alternatives such as Heart FM Anglesey and Gwynedd and Kev Bach int mornings.....And that we didn't realise the reason they don't want mediation is because someone independent might say...well duh actually the BBC offer is in fact fair.

And as for the poets, who are also on a sympathy strike...by refusing to partake in Talwrn Y Beirdd....a word of advice - stop thinking the sun shines out of your collective arseses.

The future of the welsh language lies not in protecting the established welsh musac scene but in finding the next Catatonia. You know making it relevant to the 'youth'...and honestly does Mike Stevens do that...honestly?
Posted by Rhys Williams at 09:57

In fairness to EOS I DO agree with their position. They are protesting because Radio Cymru isn't viewed as a "national station" as it once was. Whereas Radio Wales is. So, from what I understand- if music e.g Dafydd Iwan is played on Radio Wales they must pay more than Radio Cymru would. I don't understand why this is (bearing in mind Radio Cymru broadcasts throughout the UK, but Radio Wales *only* in Wales).

But I also agree that EOS have misjudged the situation. I probably listen to Radio Cymru more now than I used to. The reason being because I quite enjoy the variety of music they now play. I've always thought it is ok for Radio Cymru to play a mix of Welsh and English songs (it works for Heart, and it also works for the French!). As for the bards, well- I won't say anything!

If the reports are confirmed, This climbdown now by EOS is definitely the wrong thing to do- once you take that decision to strike- you should stick by it.

So all a very peculiar situation. Perhaps EOS should have asked ALL (and I mean ALL) Welsh musicians to join their group. This would mean NO Welsh songs at all available to play on Radio Cymru and would almost certainly have forced the BBC Trust to do something.