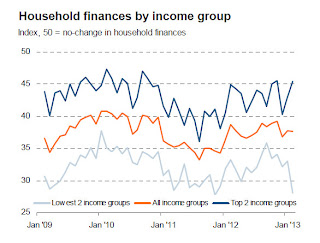 It shouldn't come as a surprise that during a economic downturn the hardest hit are most likely to be the poorest in society.

And latest findings of the Markit Household Finance Index™ (HFI™) show exactly this.

"February data showed a widening divergence across the five household income groups. The lowest income category saw the sharpest deterioration in their finances for 14 months. Those in the second-lowest group (£15,000 – £23,000) indicated the greatest squeeze on their finances in the survey’s four-year history. By contrast, the remaining three income categories registered slower rates of deterioration than in January, with the highest earners (£57,751+) noting the joint-slowest pace of contraction in a year."

Tim Moore, Senior Economist at Markit and author of the report said:

“There was no let-up in the squeeze on UK household finances during February, as higher living costs and muted wage trends combined to reduce cash availability at the fastest pace since mid-2012. Inflation expectations remain close to their highest since the survey began four years ago, echoing recent warnings from the Bank of England that price pressures will remain elevated in 2013.

“Worsening consumer finances are likely to further rein in spending on the high street and, to complete this circle, latest survey data showed that retail sector workers were the most downbeat about their job security and workplace activity in February.

“The lowest income households saw their financial situation move in an entirely different direction to the highest earners in February, and by a much greater degree than in recent years, according to the survey’s main wellbeing indicators. Widening disparities across the income groups were most prevalent in terms of savings, debt trends and the year-ahead financial outlook.”
Posted by Rhys Williams at 15:35

'Because we are worth it!'