The rain in Valley, Ynys Môn for April to June 2012 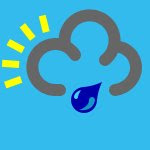 Therefore based on my non-official calculations and some provisional data from the Met Office,  in April we had slightly more rain than average, May we had less rain than average and in June we had double the average of rain, but still it was not the wettest we have had since 1931.

but when is the sun going to come out?