The preferred route for the proposed Caernarfon and Bontnewydd Bypass has been announced by the Welsh Government, although there may be some time before it is eventually built, especially with a price tag that could reach £100 million, if not more.

What confused me was the following from the above:

Caernarfon Town Council had written to First Minister Carwyn Jones, demanding to know why no route has been chosen despite two public consultations.

And there was me thinking they had chosen the purple route?

What's the purple route you may ask, see below I reply (click on image to enlarge): 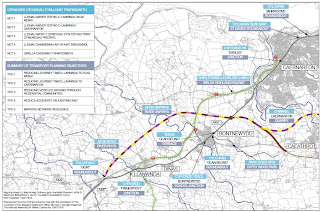 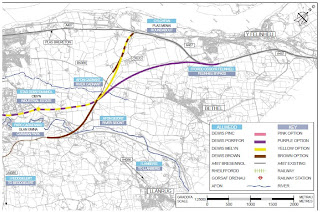 Also I think the purple route became a 'TR111 route protected for planning purposes' as shown on the plan below:

By publishing a TR111 plan, the Welsh Assembly Government protects the route under Town and Country Planning (General Development Procedure) Order 1995. This means that the Local Planing Authority will refer to the Welsh Government all future planning applications that are within 200 metres of the center line of the preferred route.

Also for any any property being sold within 200 metres of the protected line, the proposed scheme would be declared on any searches carried out, and in certain circumstances any owner having difficulty selling property on the line of the route may apply for blight. In certain cases this might mean the Welsh Government purchasing the property. See Blight and Discretionary Purchase (pdf file). Please note same provisions applies to Wales.

And for those of you wondering what the "Tra34 Net Present Value for the A487 Caernarfon to Bontnewydd Improvement Scheme options" is  - see Welsh Government Disclosure Log 2011.
Posted by Rhys Williams at 11:44

"There had been concerns the bypass was being put on the back burner."
"Caernarfon Town Council written to First Minister Carwyn Jones, demanding to know why no route has been chosen despite two public consultations."