A fair tax system and Vodafone. 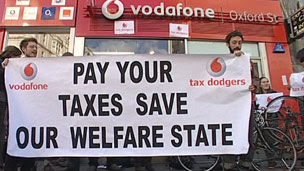 To delay the introduction of the 3p rise in fuel duty the Chancellor needs to find around £500,000,000 from somewhere. But where will this money come from? - we are told over and over by the Conservatives that there is no money left.

Maybe it would help if we had strong and clear tax laws, that clamped down on companies using tax havens or dubious tax avoidance schemes as a means of  reducing their tax liability. After all large companies go out of their way to show how green and ethical they are, but still think it's OK to employ tax avoidance schemes.

At the end of March 2012 BBC News reported - In his Budget speech, Chancellor George Osborne spoke of his disdain for tax evasion and aggressive tax avoidance, describing both as "morally repugnant".

And what sort of aggressive tax avoidance are we talking about?

You remember Vodafone whom back in 2010 denied they had a tax liability of £6bn to the UK. A spokesman for Vodafone speaking to  BBC News at the time denied the tax bill reports, adding: "We pay our taxes in the UK and all of the other countries in which we operate."

Although if Reuters is correct whilst Vodafone does pay it taxes in the UK, in 'other countries' such as Germany and Spain they pay more. And before you start saying how lower taxes makes a country more competitive, do read the above Reuters article and their comparison between Germany and  UK and Vodafone investment.

We wait to see details of the Chancellor Treasury's plans to introduce a General Anti-Avoidance Rule (GAAR), which aims to deter abusive tax avoidance schemes, by reducing legal uncertainty around what constitutes aggressive tax avoidance as opposed to legitimate tax planning. And whether in addition to stronger powers, HRMC will be given adequate resources to make a difference in clamping down on tax avoidance.

But seeing that David Cameron recently said at the G20 summit "If the French go ahead with a 75% top rate of tax we will roll out the red carpet and welcome more French businesses to Britain and they will pay taxes in Britain and that will pay for our health service, and our schools and everything else." I wouldn't put too much weight on the chances of it (GAAR) succeeding. See also the Guardian report  In wooing French tax exiles, Cameron makes a mockery of democracy by Richard Murphy.
Posted by Rhys Williams at 13:24