Trains are a rich man's toy 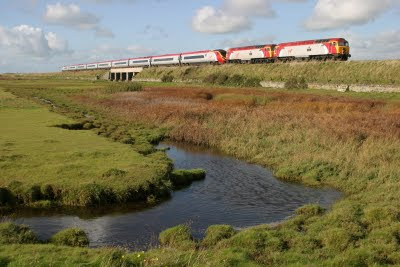 Picture from Virgin Trains
Now to be fair to Philip Hammond, the Transport Secretary, I haven't listened to the evidence he gave; when appearing earlier today, in front of the Commons transport committee. He was there to answer questions on High Speed 2 (HS2) - the planned line between London and Birmingham with a possible future extension to northern England and Scotland.

On the BBC he is reported as saying: British railways are a "rich man's toy".

Putting aside what Philip Hammond actually said, no doubt taken out of context, it cannot be denied that privatisation of the railways in the UK has been a bit of a disaster.

As mentioned in Wikipedia (about the privatisation in 1992) - "The management of British Rail strongly advocated privatisation as one entity, a British Rail plc in effect; Cabinet Minister John Redwood "argued for regional companies in charge of track and trains" but Prime Minister John Major did not back his view; the Treasury, under the influence of the Adam Smith Institute think tank advocated the creation of seven, later 25, passenger railway franchises as a way of maximising revenue. In this instance it was the Treasury view that prevailed."

Talking of rich men and women, a report from the Press Association says:

....The payment takes the total Branson has received from the railways since they were privatised to £188.8 million.

A spokesman for Virgin Rail told the newspaper: "Virgin took no dividend for the first seven years and now the turnover is one of the strongest in the industry"...

And the Herald Scotland recently reported:

SCOTTISH bus and rail company Stagecoach is to return £340 million in cash to shareholders – equivalent to 47p a share – with co-founders Sir Brian Souter and his sister Ann Gloag respectively in line for £51m and £37m.

Now who said that the trains of the UK were a rich man's toy again?
Posted by Rhys Williams at 23:16