The constituency that is.

The Boundary Commissions of Wales, England, Scotland and Northern Ireland have or are conducting a review of the parliamentary constituencies, which’s total effect will be to reduce the number of Members of Parliament from the current 650 to 600. In Wales there will be 10 fewer MP’s at Westminster.

One of the proposal is for the constituency of Ynys Môn to merged with Bangor. 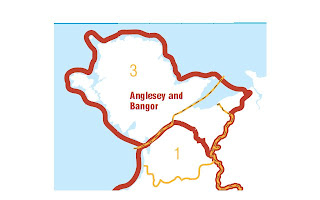 And that for this present Parliament, and all other Parliaments to be holden and kept for this Realm, one Knight shall be chosen and elected to the same Parliaments for every of the Shires of Brecknock, Radnor, Mountgomery and Denbigh, and for every other Shire within the said Country of Dominion of Wales;

But as Wikipedia explains in those days Anglesey had 2 MP's or Knights as they where called then:

As elsewhere in Wales, the Act of Union 1536 provided Anglesey with two members of parliament, one representing the county and the other representing a borough constituency named after the county town but including other "contributory boroughs" who were jointly responsible for providing for the upkeep of the MP and, in return, were granted a say in his election. However, at this period two towns, Beaumaris and Newborough, were disputing the right to be considered Anglesey's county town: under Henry VIII, Newborough was the assize town, but early in the reign of Edward VI (1547-1553) this function was transferred to Beaumaris. The new constituency was designated as Beaumaris, with Newborough as its only contributory borough, and first returned an MP in 1542; but at the same time as the assize was transferred, Newborough was also relieved of the obligation to contribute to the wages of the MP for Beaumaris which, under the terms of the relevant statute, also extinguished its right to vote in his election. Porritt, the early 20th century expert on the history of the Unreformed House of Commons, concludes that "the probability is that Newborough broke the connection in a fit of ill-humour" rather than that it was contrived by Beaumaris; but within a few decades, as the desirability of being directly represented in Parliament became more widely recognised, Newborough was trying unsuccessfully to regain its former status. On several occasions until the early 18th century, Newborough's inhabitants attempted to vote, but had their votes refused by the returning officer and his decision was upheld by Parliament whenever they petitioned in objection.

The franchise was further restricted in 1562, when Elizabeth I granted Beaumaris a new municipal charter, which reserved the right to vote in parliamentary elections to members of the town corporation. Thereafter until 1832, Beaumaris was a closed "corporation borough" of a type common in England but unknown elsewhere in Wales; its only voters were the mayor, two bailiffs and 21 "capital burgesses", and since they had the sole right to fill any vacancies arising in their number their power was entirely self-perpetuating, making the constituency a completely safe pocket borough. For the best part of two centuries before the Great Reform Act of 1832, the nomination was in the hands of the Bulkeley family of Baron Hill, and the elections were never contested.

By 1831, the borough of Beaumaris had a population of 2,497 (though, still, only 24 voters). The Reform Act extended the franchise, and also added three contributory boroughs - Amlwch, Holyhead and Llangefni. This raised the population of the revised Beaumaris Boroughs constituency to 8,547, though the number of qualified voters on the register in 1832 was only 329. This was still in practice a pocket borough, and the first contested election did not take place until the further extension of the franchise by the Second Reform Act, which brought the electorate up to almost 2,000 in the elections from 1868.

The constituency was abolished in the redistribution of seats in 1885, being merged into the Anglesey county constituency.

Returning to the current proposals the Boundary Commission for Wales in a Newsletter explains:

The Commission’s experience from previous general reviews also confirmed that any splitting of an electoral division between constituencies would be likely to break local ties, disrupt political party organisations, cause difficulties for Electoral Registration and Returning Officers and, possibly, cause confusion to the electorate.

The Isle of Wight has a population of 110,924, and according to Wikipedia:

Section 11, Clause 6(1) of the Parliamentary Voting System and Constituencies Act 2011 states; "There shall be two constituencies in the Isle of Wight."[5]. This ensures the Boundary Commission for England will be unable to attach the Isle with Hampshire or other counties across the Solent. Therefore from the Next United Kingdom general election the island will be divided into two seats, each containing an electorate far below that of Parliamentary seats on the mainland.

No chance of Ynys Môn being made a special case then?
Posted by Rhys Williams at 16:04

I wonder what the residents of Bangor and Bethesda think about this proposal?

It's a difficult one to reach consensus about.

WE may have been a consituency for 475 years or so, but we often find old rules to be irrelevant to the modern day.

It still seems to me that what we need is effective representation of the people in any given constituency and not necessarily hyper-local representation.

To my understanding the Commission is trying to have every Parliamentary constrictions around 70,000 eligible voters. From a democratic point of view that surely is fair and they are plenty of seats in the isles of Scotland which are much smaller than Ynys Mon will have to be absorbed as well. All that history is facinating but none of it was democratic!!