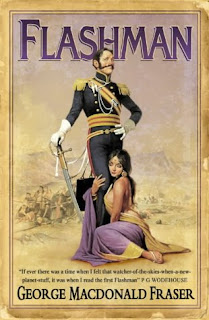 David Cameron, we are told, has been advised to tone down his 'Flashman' tendencies at Prime Minister Question Times.

But who was the first 'Tory' Flashman? - this from Wikipedia:

"In Tom Brown's Schooldays he is called only Flashman or Flashy. Fraser gave him his first and middle names, a lifespan from 1822 to 1915, and a birth date of 5 May. Flashman's first and middle names appear to be an ironic allusion to Henry Paget, 1st Marquess of Anglesey, and one of the heroes of Waterloo, who cuckolded the Duke of Wellington's brother Henry Wellesley and later - in one of the period's more celebrated scandals - married Wellesley's ex-wife.

In Flashman, [Harry Paget] Flashman says that the family fortune was made by his great-grandfather, Jack Flashman, in America trading in rum, slaves and "piracy too, I shouldn't wonder." Despite their wealth, the Flashmans "were never the thing": Flashman quotes the diarist Henry Greville's comment that "the coarse streak showed through, generation after generation, like dung beneath a rosebush." His father, Henry Buckley Flashman, appears in Black Ajax (1997). Buckley was a bold young officer in the British cavalry, who was wounded in action at Talavera in 1809. He then tried to get into "society" by sponsoring bare-knuckle boxer Tom Molineaux (the first black man to contend for a championship) and subsequently married Flashman's mother Lady Alicia Paget, a fictional relation of the real Marquess of Anglesey. Buckley also served as a Member of Parliament but was "sent to the knacker's yard at Reform". Beside politics, his interests were drinking, fox hunting (riding to hounds) and women."