To pylon, or not to pylon....that is the question.. 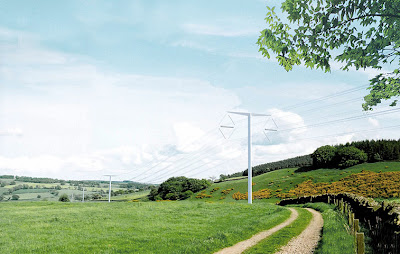 As we know the National Grid is consulting on proposals for new grid connections for the Wylfa B and the offshore wind farm array, and there is an ongoing debate as to whether the new connections should be subsea and underground. Not unsurprisingly the preferred option is new overhead lines, which got me thinking whether they will be the new T-Pylon design, shown above. You can follow the progress of the new design at the National Grid T-talk blog.

And if you want to read about the options considered for the new connection, costs and other factors: National Grid - North Wales Connections Strategic Options Report. (pdf file) - You will find that the subsea option is at least twice as expensive than overhead lines.

For at the end of the day it will be mostly down to cost, irrespective how desirable the more expensive option may be to all of us.

(2)It shall be the duty of the holder of a licence authorising him to transmit electricity—
a)to develop and maintain an efficient, co-ordinated and economical system of electricity transmission; and
b). . ., to facilitate competition in the supply and generation of electricity.

1(1)In formulating any relevant proposals, a licence holder or a person authorised by exemption to generate, transmit, distribute or supply electricity—
a)shall have regard to the desirability of preserving natural beauty, of conserving flora, fauna and geological or physiographical features of special interest and of protecting sites, buildings and objects of architectural, historic or archeological interest; and

(b)shall do what he reasonably can to mitigate any effect which the proposals would have on the natural beauty of the countryside or on any such flora, fauna, features, sites, buildings or objects.

The National Grid’s commitments when undertaking work in the UK is set out in their stakeholder, community and amenity policy - to download


And if your thinking what does 'have regard to the desirability of preserving natural beauty etc' mean, the following is an extract from the Court of Sessions -Judicial Review of a decision of the Scottish Ministers made on 22 December 2011 granting detailed consent under the Electricity Act 1989, section 36 for an application by Dorenell Limited (UK) for the construction of a wind farm on the Glenfiddich Estate, Morayshire, which was dismissed on all grounds:

....[4]In the summary of the report of the inquiry, the reporter explains that the wind farm would be around 8km to the south of Dufftown, and 2km from the northern edge of the Cairngorms National Park. The application proposes 59 turbines on a site extending to 21.5 square kilometres. The wind farm would be operational for 25 years. The reporter proceeded upon the basis that the determining issues in relation to the section 36 application were (i) the need for the wind farm and national energy policy and guidance, (ii) its environmental and other impacts, including tourism and recreation, and economic benefits and impacts, and aviation safety, and (iii) the development plan, other planning policies, guidance and advice, the Cairngorms National Park plan, and the requirements of schedule 9. The determining issues in relation to the decision on whether to direct that planning permission should be deemed to be granted were the same, under exception of the reference to schedule 9.

[5] Overall the reporter concluded that the proposals would make a significant contribution towards meeting and surpassing national renewable energy targets. The site benefited from a good wind resource. The proposals would result in landscape and visual effects of substantial adverse significance, but these would be localised and limited in extent. In his judgment, the landscape in the area has the capacity to absorb the proposals. The landscape and visual effects, including the cumulative effects and the effects on the National Park, were acceptable. He was satisfied that an appropriate layout had been achieved. There would be adverse effects on recreation, most notably on walkers and hillwalkers in the local area. However these did not justify rejection of the proposals. The effects on the key industries of tourism, food and drink, and their brand images, would not justify rejection. The economic benefit arising would be small.

[6] With regard to the proposed mitigation measures, the reporter was satisfied that the effects on birds and other wildlife inhabitats would not be sufficiently adverse to justify refusal. He was satisfied that the integrity of the River Spey Special Area of Conservation and the interests of the two European protected species on site (otters and bats) would not be adversely affected.

You can read the full judgement at  the Scotland Courts website.

So if those opposed to the pylons want National Grid to consider the alternative subsea and underground options they need to show that the National Grid is not following it's own community and amenity policy and/or the Halford Rules. Also that the proposals will be worse than what exists currently, in that....there is already a connection to the grid across the island, which I assume will be taken away when Wylfa A is finally closed. And a reasonable question is what evidence is there that the existing pylons put off visitors from visiting Anglesey - and how much worse would the new pylons make the situation?

Of course there will be an adverse effect, especially locally near to the pylons, but will this in monetary terms be more than the additional cost of the alternative subsea and underground options?

The National Policy Statement for Electricity Networks Infrastructure (EN-5) says.."The Planning Inspectorate should, however, only refuse consent for overhead line proposals in favour of an underground or subsea line if it is satisfied that the benefits from the non-overhead line alternative will clearly outweigh any extra economic, social and environmental impacts and the technical difficulties are surmountable."

And there you have it, the crux of the matter, that until national policy is changed we will be having pylons.