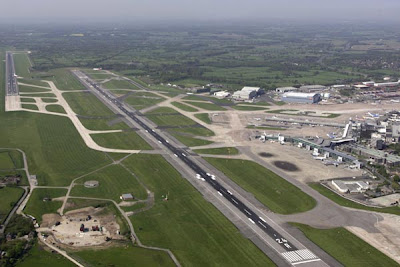 Whom is the largest UK-owned airport operator, serving around 24m passengers and handling half a million tonnes of air freight every year, through its ownership and operation of Manchester, East Midlands and Bournemouth airports ?

That'll be the Manchester Airports Group; privately managed on behalf the shareholders, which also includes the commercial property company, MAG Developments, which has a £350m portfolio across the three airports and is leading the £650m major Enterprise Zone development, Airport City, at Manchester. This year their profits was £65.5m

And who are the owners of the Manchester Airports Group?

They would be the ten local authorities of Greater Manchester. As follows:

Sound like a good model on how to run a regional private/public partnership airport to me, forming part of a regional development plan.....you know a good example of something that does work, rather than political rhetoric.

Cardiff airport could be a big money spinner - but only if the good people of Bristol would agree to close their airport! As long as Bristol is within easy communting distance of South Wales then the airport in Cardiff may as well close down. So let Carwyn Jones and his inept politicians in the gin palace in Cardiff Bay come to their senses, they couldn't organise a shag in a brothel never mind running a international airport.