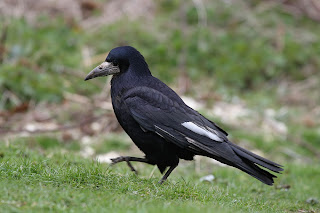 Not this crow this is a rook.


For the last few months I have noticed a crow with some white feathers in its wings and tail which has intrigued me. Sorry no pictures yet, but it looks a bit like the rook above. Today I googled 'crow with white feathers'.

Much more usual is a Blackbird or crow with a few white feathers, on the body, wings or tail. Birds with large amounts of white are the result of a genetic flaw in both male and female. The reason they remain rare is that both parents must carry the genes responsible for the white plumage. Birds with just a few white feathers may arise in the same way, but equally may have suffered an injury or even a disease which has damaged the feather follicles so that the feathers grow without any pigment. Most reports of birds with a few white feathers are of Blackbirds, Starlings and crows, but then these not only are these common birds, but their normal colour is black or very dark so that white feathers will show up well. It is quite usual for the amount of white to grow as the bird gets older.
Posted by Rhys Williams at 14:58