Wylfa A and Fukushima Daiichi, Japan 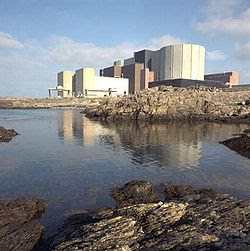 Wylfa
The nuclear emergency at Fukushima Japan, brought about by the earthquake and tsunami has risen questions about the safety of nuclear plants throughout the world.

Here on Anglesey we have Wylfa A, which is programmed to be shut down and decommissioned from next year. So what lessons can we learn from the accident from Japan, and how safe is Wylfa A?

The first thing to note they are of a different design, the nuclear plants at Fukushima being boiled water reactors (BWR), whereas the two reactors at Wylfa A are gas cooled reactors (GCR).

Wylfa A was the last Magnox nuclear power plant to be built in this country and is the largest of its type. The reactors themselves operate at relatively low pressure in comparison with modern reactors. The reactor is cooled by C02, and are designed that should the pumping systems fail the reactors would still be kept cool (after shut down) by natural circualtion of the C02. As the coolant is already a gas, explosive pressure buildup from boiling is not a risk, as happened in the catastrophic steam explosion at the Chernobyl accident.

The main reason the Magnox design were abandoned was cost and the fact that they only operate at 28% efficiency.

The reactor fuel is unenriched uranium, which is encased in the alloy magnox (hence name for design) that is a mixture of magnesium and aluminium. Because of the low burn up rate of the fuel, on load refuelling was considered essential, as the cost of shutting down the reactor to refuel would have made them uneconomical.

In Fukshima we know that initially the emergency shut down of the reactors was going well and that the control rods had been inserted succesfully. What failed were the cooling systems required to remove the residual heat, at Wylfa A even in the event of the pumps failing cooling would still take place by natural circulation of C02.

The other major and potential greatest danger at Fukushima was the loss of water from the spent fuel ponds. As these ponds are outside the primary containment building, any fire or melting of the rods would have resulted in the radiation being realised directly into the atmosphere.

The system for storing spent fuel rods at Wylfa A are completely different in that they are kept in dry store cells, also cooled by carbon dioxide.
Read More:

It's not just where the spent fuel rods are stored.

(See slides 24 & 28 here: www.nuclear.utah.edu/class_notes/5730/5-reactors.ppt
You may have to enlarge the pictures for the reactors to see the detail - or go to EPR and the Westinghouse web sites where they have schematics for the new reactor designs).

As far as I can see the new fuel pool is above the reactor concrete shield, (i.e. the bit that exploded in reactor 1,3 & 4 at the Fukushima Daiichi plant).

The reportage isn't very clear when it comes to differentiating between the new fuel and spent fuel storage pools.

Hmmm, and what takes the heat out of the CO2? I think that's water. Sea water in Wylfa's case. Any reactor experts out there that can tell us what would happen if the sea water stopped circulating in terms of core cooling?

To anon 13:48 Thanks, I think I did say the gas would keep cooling the reactor by natural circulation after shut down in the event of power failure (or SCRAM to use the technical term).

I think they use sea water to condense the pure water after it has been through the turbines, so that is can be returned into the reactor containment building and the heat exchange unit. Pure water (if I’ve got the right term) is used, as it does not pick up radiation particles easily.

I am no expert on nuclear energy and I may be wrong.

Correct me if I’m wrong but I think that newly enriched uranium rods are quite passive and therefore do not need to be stored in water to be kept safe.

Once the spent fuel rods have cooled sufficiently (after refuelling) they would be transferred to the spent fuel ponds in a separated building, where they may need to stay for a very long time.

That is one problem the nuclear industry has never found a commonly agreed solution for, the safe disposal of nuclear waste.

NOBA: I read an article on the MOX fuel canisters from a TAPCO report.

It stressed that the fuel rods had to be stored vertically to prevent them getting to close to each other in case they overheated - that was for fresh fuel canisters.

I would have thought the new fuel rods for the BWR would be pretty active, they certainly must have the potential to be active, or they wouldn't use them.

My understanding is that the both the new and initially the old fuel rods are stored in the 25m deep pool above the reactor. (The one with the gantry crane over it) and that the spent rods would be moved to an external (dry cell containment system) later on.

TAPCO were in the process of building a dedicated spent fuel storage plant, as the Fukushima plant had reached an 80% of storage capacity and were doubling up storage of spent fuel rods in some of the pools.

Having searched the web for reactor designs I found plenty of info about the different types of reactor, but precious little about storage and transfer mechanisms, processes and procedures for the fuel rods, both spent and new.

Further to my last comment I paste this from Golum XIV's conclusion to his latest post regarding both financial and nuclear industry regulators:

"What do the regulators actually do? How do they see their job? Is it to hold their industry to account for wrong doing? Or is it to regulate what the public is told, what spin is put on events, and to help decide what is withheld as 'confidential'?

I suggest regulators have been largely there to 'regulate' public opinion not corporate malfeasance. I think, all too often, particularly at the top of the organization, where the move to lucrative jobs in industry is that much closer, 'regulators' see their job as helping to keep the industry and its relationship with the public running smoothly. They are there to regulate what we are told, what we think, to re-assure us in times when the industry feels itself under attack and be the lubricant that keeps the wheels of the industry well greased.

What have the regulators done for us. I think the evidence is clear - they have screwed us for a fee."